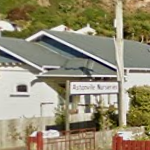 We didn’t choose to live in Dunedin. It was a decision made by my employer, the New Zealand Broadcasting Corporation, with no consultation. It was also the result of a promise made and broken by the head television producer, Roy (aka “Rosie”) Melford. I had just qualified as a producer, having “passed” Roy’s Producers’ course, which apparently gave the NZBC the right to post me, and my family, to any of the four state-owned TV stations in New Zealand, Auckland, Wellington, Christchurch and Dunedin. Roy had promised that if I passed I would be posted to Auckland, as soon as a vacancy occurred. This edict came at a very bad time, shortly after the birth of our second child.

Bear in mind that Wellington, where we lived at the time, and Dunedin are 492 miles apart by air. This wasn’t too bad a prospect for the family, but I would have to get there by road and ferry. The plan was go ahead to find somewhere to live and check in for duty at DNTV2.

When I arrived in Dunedin it was eight degrees below. I had been seasick on the overnight ferry from Wellington to Lyttelton (Christchurch), facing the 230 mile drive in our campervan down the East Coast of the South Island, to find a hotel in Dunedin. I’m not usually fussy about accommodation, but my mood was not improved by finding the only heating in the room was a two-bar electric wall mounted heater. I spent a cold sleepless night fuming about the turn of events and working out what to say in the morning to my new station manager Alf Dick, whom I had never met. END_OF_DOCUMENT_TOKEN_TO_BE_REPLACED

How many people do you know who have been hurled into the air by a snapping trolleybus cable? And lived to tell the tale.

I can’t find anyone, apart from me; a few injuries and deaths caused by other trolley bus accidents, but nobody who managed to escape death-by-trolleybus without the presence of a trolleybus. Before I tell the tale, if, like my grandchildren you don’t know what a trolleybus is, or was, it’s like a tram without tramlines, powered by overhead electric cables. Trolleybuses replaced trams in various cities, including London, where I was dragged up, and, as it happens, in New Zealand, after the war. Let me set the scene. END_OF_DOCUMENT_TOKEN_TO_BE_REPLACED