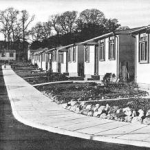 Fellow Pilgrims Way denizen Paul Kennedy recently sent me a file used to illustrate a talk by Philip Grant of the Wembley Historical Society. The talk covered all the prefab estates built just after the war in Wembley, including Pilgrims way, and draws on evidence held by Brent Archives. The Pilgrims Way section is about half way through the talk, and includes a letter from Charlie Watts and some images I have not seen before. Thanks Paul!

Here are some of the slides Philip used, but you can also download the complete presentation Kingsbury’s Post-War Prefab Homes.  (pdf file – 8Mb) END_OF_DOCUMENT_TOKEN_TO_BE_REPLACED

The man in the Dargaville pub turned out to be Keith Bracey, presenter of the local TV regional news magazine programme Town and Around, produced daily by the New Zealand Broadcasting Corporation station Northern Television, formerly AKTV2, Auckland. I’m not sure why I had been invited to the Northern Wairoa hotel, and I was a bit embarrassed anyway because we didn’t have a TV then and I hardly knew who Keith Bracey was. I had also never quite got used to New Zealand beer or the “six o’clock swill”, i.e. drinking to excess with colleagues in public. To a deadline. Or at all, really.

Well Keith turned out to be an affable kind of guy, happy to spend NZBC expenses on the locals, presumably on the pretext of boosting viewing figures, even though at the time there was only one TV channel in the country. I remember little of the conversation, except talking about my fall from grace at Dargaville High and the probability of going back to the UK. Keith had a different idea; why not come and work in TV?  END_OF_DOCUMENT_TOKEN_TO_BE_REPLACED

Some time ago I wrote about my short-lived spell in the BBC2 Presentation Programmes Department in 1973, not long after the demise of Late Night Line-Up in 1972. Its predecessor “Line-up” had started out as a kind of early evening trailer when BBC2 first went on the air in 1964 but later that year it morphed into “Late Night Line-Up” featuring “open and candid discussion among invited guests”, transmitted live after the 9.00 p.m. watershed.

In my earlier post I mentioned Michael Dean, whom I got to know post Late Night Line-Up, as a friend and colleague, when I moved over from BBC2 programme directing to BBC1 Presentation Department as a Network Director (AKA Transmission Control and Trailers.) At that time Michael was working for Auntie as a continuity announcer prior to returning to his native New Zealand, and we used to chat and have a laugh or two in the tea room from time to time, often about NZ , whence I had just returned after a six-year stopover. At the time I knew Michael had worked on Late Night Line-Up, but did not fully realise that he had been a celeb as a “highbrow” arts and current affairs presenter and interviewer on the show, along with colleagues such as Denis Tuohy, Joan Bakewell, Tony Bilbow and Philip Jenkinson. END_OF_DOCUMENT_TOKEN_TO_BE_REPLACED

1973 was not a good year to be in Britain, let alone to return there after six years in New Zealand. Return we did though, with very little money, no home and two lovely kids. My immediate priority was to get a job.

The first bite I got from hawking my CV around was at Scottish television in Glasgow. I had a couple if interviews there, and the company were keen to take me on, but there was a problem with the ACTT union closed shop. No ticket-no-job but no-job-no-ticket. After some negotiation they did offer me a trainee post, which I had to turn down, mainly because we could not afford to live on the trainee salary. Pity really; I liked it there, they seemed a friendly bunch. I recall being introduced to a genial up-and-coming comedy performer by the name of Billy Connelly. Maybe I should have accepted that offer.

At the same time I was trying my luck at the BBC. END_OF_DOCUMENT_TOKEN_TO_BE_REPLACED